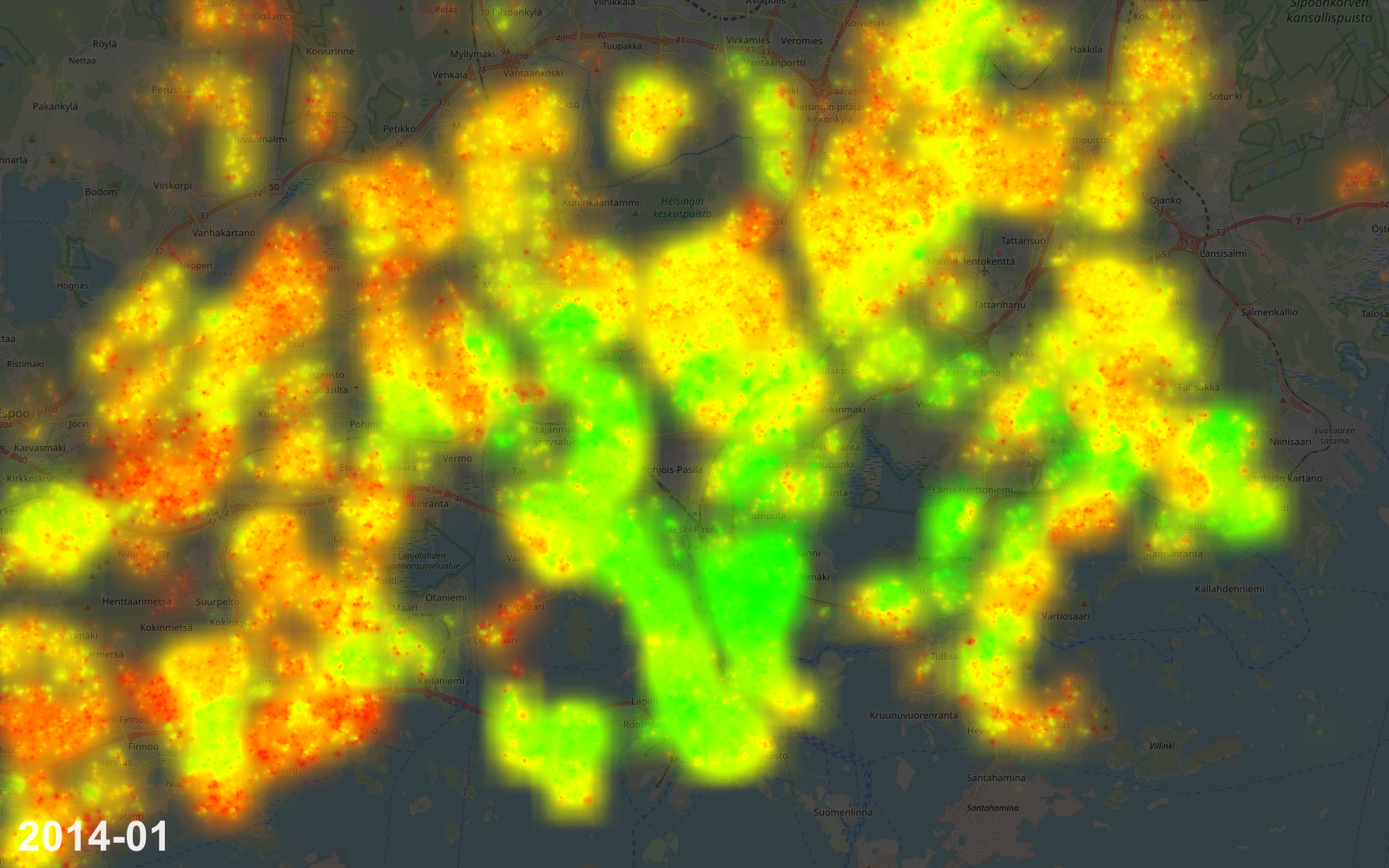 Kiinteistömaailma, eCraft and WhereOS implemented together an analysis of house price development in six largest cities in Finland. The raw data produced by Kiinteistömaailma was analyzed with eCraft Property Valuator-tool, and visualized into a heatmap video using WhereOS.

The price development videos clearly show, how the prices dropped during years 2008 and 2009 due to the world wide financial crisis, but after that the price development has been steady and positive. Regional development in the capital area, but also in smaller cities has varied a lot: the city centers usually show as green (price has increased), whereas red areas appear mostly further away from the city centers. “The heatmap animation produced by eCraft and WhereOS shows in an interesting way how real estate prices have development during the last decade in the largest cities of Finland. It shows clearly how price levels change in different cycles not only between large cities, but also in different areas within the cities”, says Taina Mustamo from Kiinteistömaailma.

eCraft Property Valuator is a software/data/artificial intelligence as a service, which offers the best estimates and predictions for real estate price development in Finland. “eCraft’s Property Valuator is a unique model, and an excellent tool for calculating hyperlocal price indexes.”, says Jussi-Pekka Partanen from WhereOS.

The data from eCraft Property Valuator was visualized using WhereOS heatmap rendering function. The heatmap was calculated by dividing Finland into very accurate grid and calculating the average house price for each of the grid cells for each year and month.

The monthly grid data was converted into a visual form using the heatmaprender-function ja combined into the final video file using rendervideo-function. In total, processing the price data from eCraft Real Estate Price Analysis into grid data, visualized heatmaps, and final video required roughly 10 lines of code in WhereOS. “WhereOS is an excellent tool to analyze and visualize geospatial timeseries data”, says Tommi Vilkamo from eCraft. ”It has never been possible to do such an accurate and lively visualization of real estate market data before.”

You can see the videos of six largest cities using the links below:

WhereOS is a data innovation platform and service.

For teams and businesses who want to get more value out of data – WhereOS minimizes your effort and maximizes your results.

Ecosystem as a service